Lhaviyani Atoll is 37km wide and 35km long and lies 120km north of Male. It takes about 8 hours sailing time from Male to reach the atoll, which consists of 54 uninhabited islands, five inhabited islands and currently four resorts are operational, Palm Beach, Komandoo, Kanuhura and Kuredu. Another two islands have been selected for resort development. They are Hudhufushi and Madhiriguraidhoo.

The principal occupation of the islanders is fishing. Previously sail weaving and coir making were the major occupations. The main entrance at the north of the atoll is the 500 metre-wide Kuredhdhoo Kanduolhi.

The western side of the atoll is characterized by many small islands, reefs and narrow channels with the island of Kanifushi projecting sharply to form the west point at the atoll, which is marked by a light. The main entrance to the atoll is between the southern most island of Aligau and Lhossalafushi. Maduvvari lies in the middle of this 7.5km wide opening. The eastern side of the atoll has longer reefs with fewer openings, culminating in the 30km long barrier reef between Selhlhifushi and Aligau. 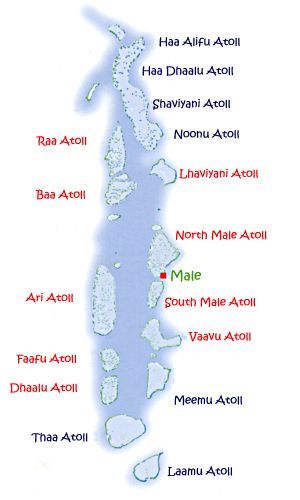